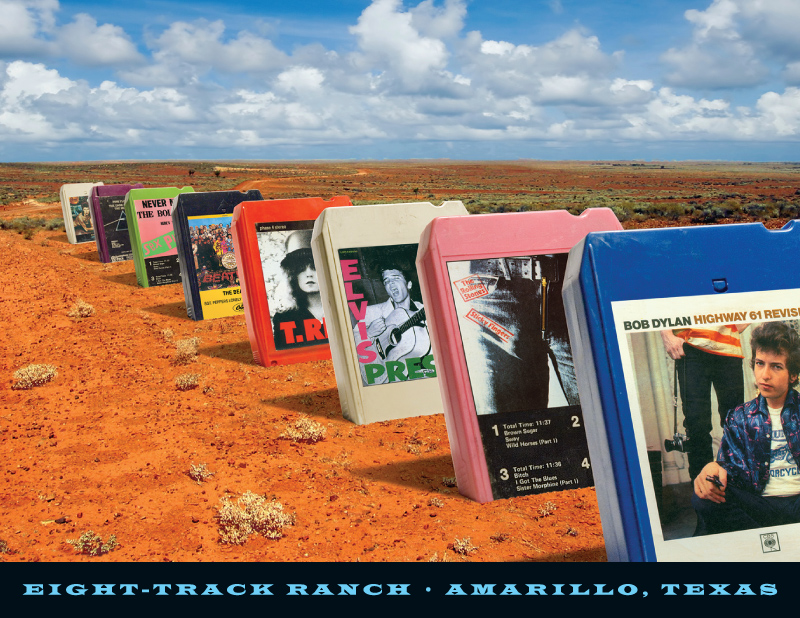 April 11th is officially designated as National Eight-Track Tape Day. I discovered this when I was contracted to create a greeting card for the Minneapolis based printing company Printcraft. They asked a number of designers to come up with card designs for odd, but real, national holidays, in lieu of a set of holiday cards, that Printcraft distributed as gifts. While they provided a list of holidays as examples, I did some research and discovered Eight-Track Tape Day, and chose to use that one for my contribution.

Inspired by the sculpture “Cadillac Ranch” in Amarillo, Texas, I envisioned a giant set of eight-tracks stuck in the ground like the Caddies of the actual sculpture, and was off and running. Along the way I learned that eight-tracks were still being manufactured into the late 1980s. So, besides using some influential albums from my youth, I included the Sex Pistols to my imagined sculpture park.

On the inside of the card, I included a schematic of the interior of an 8-track with the headline “April 11th Eight-Track Tape Day. Rock On!” and this description:

The 8-track tape, originally called the Stereo 8, was created in 1964 by a consortium led by Bill Lear of Lear Jet Corporation, along with Ampex, Ford, Motorola and RCA Victor Records, and was made popular by the inclusion of 8-track players in Ford automobiles in 1965. 8-tracks were being phased out in the US by 1982, but were still available through record clubs as late as 1988.

I can’t imagine a worse way of breaking an album into a car stereo friendly format. Divided into 4 segments, some album tracks would actually have this crazy clicking-popping-stop-start interruption of a song if it happened to occur during the segment change. Nevertheless, I have fond memories of driving my Dad’s Pontiac Catalina on the dark winding back roads of southeastern Virginia, with high school buddies Mark, Eric and Kevin, rocking out to 8-tracks. That is until I put that beautiful boat of a car into a ditch! Didn’t get to drive my Dad’s cars much after that accident, but I did keep rockin’!