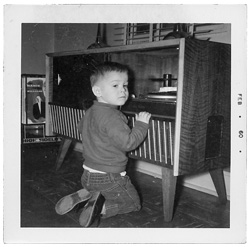 This photo says it all! From as early as I can remember I’ve loved music.

This snap is my 3-year-old self in Yokosuka, Japan. My father was stationed there in the Navy. My first memories in life are from Japan. There are 8mm movies of me sticking my head into that beautiful stereo cabinet, hovering over the turntable.

A few years after that, living in Illinois (not too far north from where I currently reside in Chicago), I can clearly remember sitting on the floor of our living room, watching The Beatles on The Ed Sullivan Show. Besides loving the music, I was also fascinated by the stage set, which prompted me to start drawing little schematics of rock groups on stage. Some real, some imagined.

Fast forward a few more years and we’re living in Pearl City, Hawaii. The variety of music on the radio in the 60’s was incredible, and I loved the mash up of genres from surf rock to Motown and beyond. I was even a barefoot drummer in a patio band called “The Time Watchers”. A pretty clever name for kids that age, probably better than our band. The band was short lived. But I imagined it, and there I was. With brother Brian on tambourine, Girard on electric guitar, and a rotating cast of kids, that like me, wanted to be in a band. We’d setup on patios all over the Navy housing project, and always attracted a crowd. Fun times. 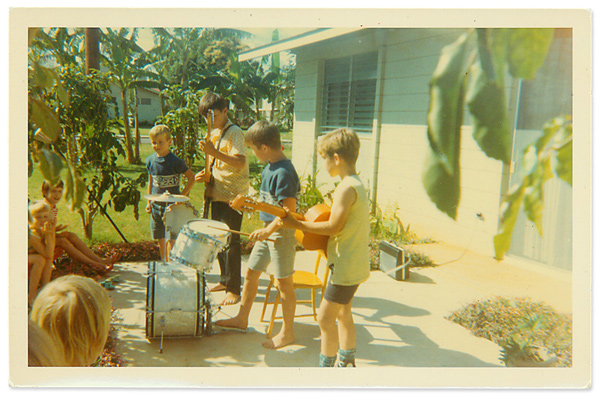 More importantly, it was in Hawaii that I received my first formal art training. In the third grade, I was doing a lot of day-dreaming and doodling, and falling behind in school. Not hard to do when there’s fragrant flora and coconut trees swaying outside the schoolroom’s wood shutter windows (no glass, no screens). I remember copying logos of my favorite TV shows, bands, sport teams, and I loved recess — a little too much, I guess. 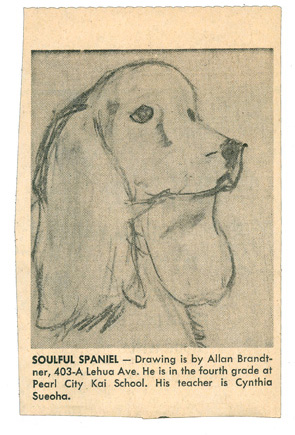 Fortunately, my teacher Ms. Lau met with my parents in an effort to get me to focus more on my school work. I was restricted to our house after school, did a lot of homework, and managed to pass third grade. At the same time, knowing how much I liked to draw, Ms. Lau also suggested arranging some formal art lessons for me. And to my parents credit, they agreed.

So every Saturday, I was driven up a winding hillside road to the home of a Chinese artist, with a wonderful garden and views of Honolulu below. I can’t recall his name, and he hardly ever said a word. Instead, he’d look at my work, and the still life I was attempting to capture, and simply point to a specific area. Essentially, he taught me how to observe light and shadow, first with charcoal and eventually soft pastels.

When I returned to school after that seemingly “endless summer”, Ms. Lau wasn’t teaching there anymore, and I never saw her again.

The following year, my first published drawing appeared in the Honolulu Star-Bulletin. My professional illustration career began in earnest in 1979, while I was still in college — with an assignment for the Detroit News. At the time I was experimenting with different art mediums, so it wasn’t until the early 8o’s that I pulled out that old box of pastels for a magazine assignment, and I knew that pastels was the medium for me from that point on.

Several years ago, after finding my third grade report card, I made some attempts to find Ms. Lau. I never knew her first name. Unfortunately, the report card simply listed her as Ms. S. Lau. In Hawaii, Lau is as common as Smith or Jones, so local phone directories were of no help. Coincidentally, an artist friend of mine from high school, James Goodman, who currently lives in Oahu, dropped by the school to inquire about Ms. Lau on my behalf, but faculty records didn’t go back to the 6o’s.

It’s a shame to think that she’s never known the impact she had on my life.