I woke up this morning to the news that blues legend James Cotton has passed away. There’s not too many of these influential American artists still alive today, but the legacy they left behind will surely endure forever.

I had a funny encounter with James Cotton a number of years ago while at the post office. I happened to be wearing a Sun Records t-shirt, and while standing in line, I noticed a freckle-faced elderly man leaning on a cane, looking at me and smiling broadly. Even though I had seen him perform, I didn’t recognize him. He pointed to my shirt and announced that he had recorded for Sun Records, to which I sheepishly replied “Really, what’s your name?”

I was surprised and embarrassed with his answer. I told him how great I thought he was, and he talked about recording with Sam Phillips in Memphis back in 1953. Something I didn’t know at the time. I had heard rumors that he was in pretty bad shape, and he certainly was that day, but while reminiscing his mood brightened, and he seemed to stand a little taller. Thankfully, his health improved and he was able to record and perform again. The next time I saw him on stage, I couldn’t believe the transformation — the feeble man I met that day was once again on top of his game. 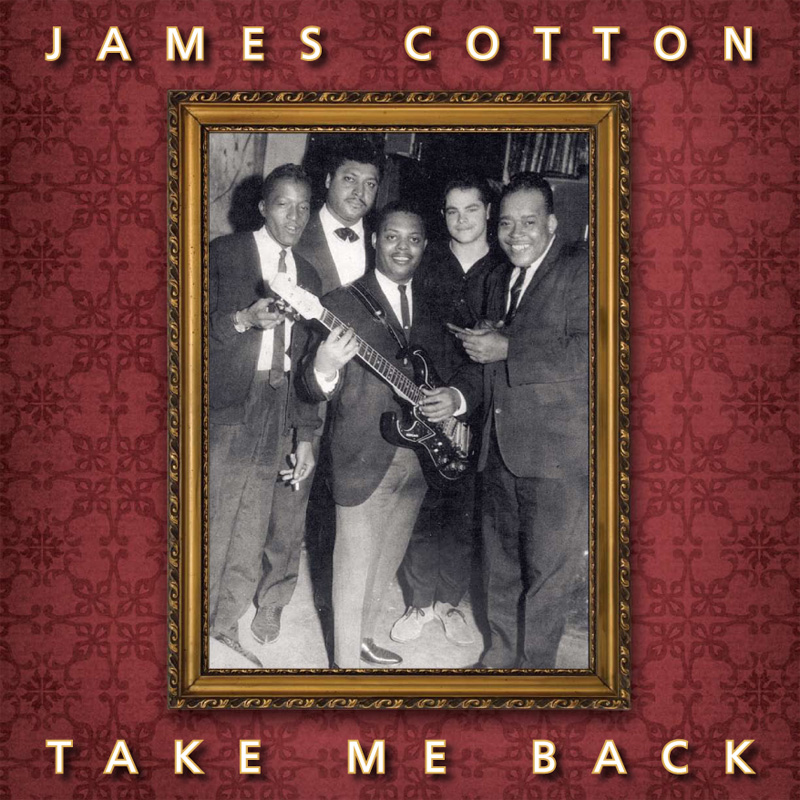 A few years ago Blind Pig Records reissued a 1987 release “Take Me Back” as part of their Audiophile 180-gram vinyl series, and I designed the cover, which featured a photograph of the original James Cotton band in 1966. Here’s some text I pulled off the Blind Pig website that sums up this killer record. One worth checking out, if you haven’t heard it.

Take Me Back earned a Grammy nomination for harmonica master James Cotton after its release in 1987.  After seeing blues (including his own) being heavily affected by rock ‘n’ roll in the 70’s and 80’s, Cotton decided to return to his roots and record an album of blues standards that have most influenced rock in an effort to “set the record straight about the history of rock ‘n’ roll.” Accompanied by blues luminaries and former Muddy Waters bandmates Pinetop Perkins on piano, Sammy Lawhorn on guitar, and Sam Lay on drums, Cotton recorded a sterling set of classic blues tunes that successfully captures the spirit and sound of the early days of Chicago blues.

Rest in peace Mr. Cotton. You were the real deal!