I’ve worked with blues harmonica master and vocalist Matthew Skoller for a number of years now, and had a lot of fun working on the CD packaging for his latest release titled “Blues Immigrant”. A great collection of songs, mostly originals that echo the past, but are clearly in the now. The title track has been nominated for Song of the Year for the 38th Annual Blues Music Awards which will take place in Memphis in May. Living Blues named the record the 2nd best record of 2016, and Mojo picked it for the 3rd best blues recording of 2016.

In addition to topical tracks like Big Box Store Blues and the searing Story of Greed, Matthew also recorded a version of The Devil Ain’t Got No Music that he wrote for an acoustic blues gospel record by Lurrie Bell, which Matthew also produced and I art directed and designed working with world-renown photographer Paul Natkin. The latter track was also nominated for Song of the Year at the Blues Music Awards a few years ago. Other personally favorites of mine include the moody Tear Collector, and the biting commentary Only in the Blues.

For this package design, I also did the cover photograph, and some recording sessions that captured Matthew, and his band, sculpting this blues masterpiece. Riffing off the title track, I also created a faux green card that became the cover of a 12 page booklet that contained lyrics laid out over scans of Matthew’s notebook pages, and other odd scraps of paper, parking tickets, etc., that Matthew would use whenever the muse struck. 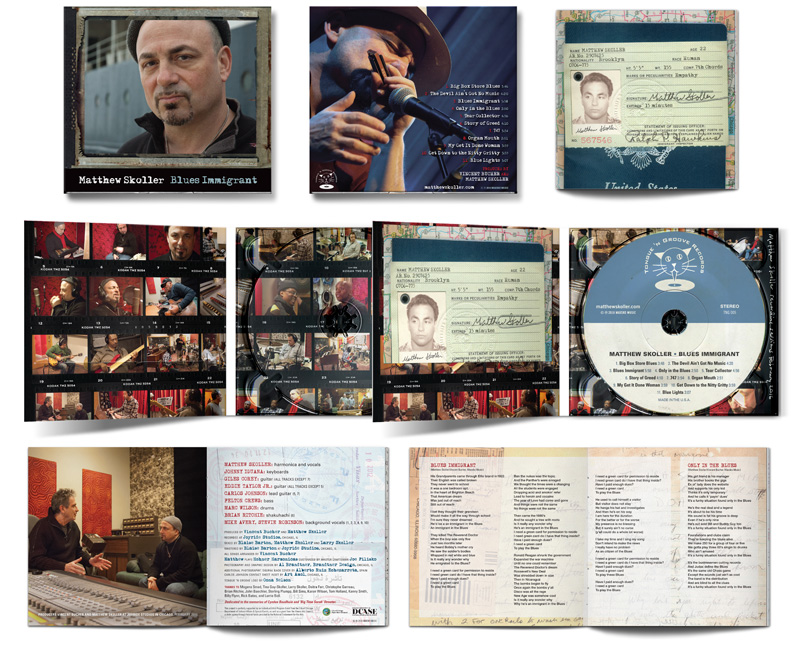